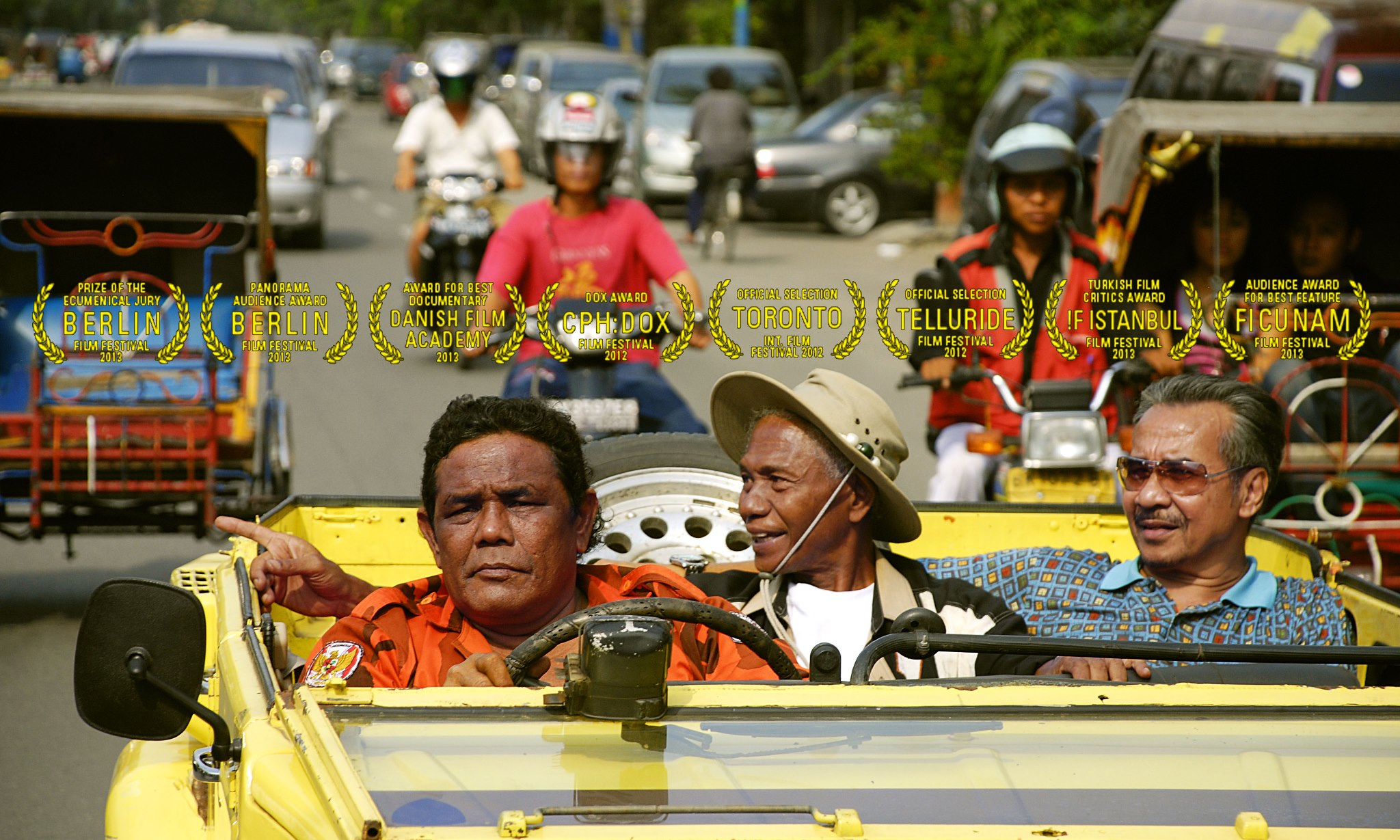 “It is forbidden to kill; therefore all murderers are punished unless they are in large numbers and to the sound of trumpets.”

A coup d’etat took place in Indonesia in the mid-1960s and resulted in a military dictatorship. The leaders of this coup hired a lot of gangsters to clean the country of the so-called communists. More than a million people who were supposed to be communists lost their lives. 40 years later, Joshua Oppenheimer finds these killers, many of them considered national heroes in Indonesia. Oppenheimer does not invite them to a simple interview but asks them to remake those horror scenes as they remember them. The executioners of that time are ready to remake the scenes of murder and torture, and they do it with a smile on their faces. It’s a grotesque funeral show performed by executioners. Some agree to play in the movie for fame, others – to get rid of the nightmares that haunt them every night, others – to demonstrate how easy it is to kill and go unpunished

The killers are respected people in contemporary Indonesia. They have families. Many are dealing with racket extortions from local entrepreneurs, but they do it very kindly. Sometimes, gangsters gather at the meetings of Pancasila Youth (an Indonesian paramilitary organization founded in 1959, which has over three million members). “The governor needs Pancasila to maintain security,” they tell us, “the police are not able to ensure security. Instead, gangsters can create security and riots. We showed our potential when we exterminated communists.

The Act of Killing is an attempt to understand the consequences of forgetting. Every nation and every human being has to deal with mass killings, either the historical memory or the horrible reality of it. The 1903 Jewish pogroms in Bessarabia, Nazi ethnic cleansings and concentration camps, Katyn, Stalinist deportations, Guantanamo. The list is too long and too awful to be fully discovered. What is more terrible is that most executioners have never been punished, and we, humanity, our collective memory prefers to forget about these horrors. By forgetting we don’t learn anything. It is a cyclical movement of mass death driven by the same human errors.

The Act of Killing is too strong a visual experience, too intimate. It brings back the atrocities of the past, and gives them a burlesque tragicomic look, in a manner that is able to penetrate our conscience better than any book on history.  “Aren’t you afraid you’ll end up in the Hague tribunal after this movie?” Oppenheimer asks one of the gangsters. “Why should I be afraid? I would really like to get there, I would become famous. ”

The narrative is factually combined with the fiction in this grotesque, nightmarish, and absurd picture. You no longer realize what is real in the film and what is invented. “At that time we were under the influence of movies with Nazis and gangsters”, another character tells us. “But our sadism surpassed the horrors of these films. I crushed their necks with wood. I was hanging them. I was strangling them with wire. I was cutting off their heads. We were allowed to do that. Yes, we killed people, and we were never punished. We killed people but we had nothing to do with this. Maybe I’m trying to feel better by saying that. Because it works. I never felt guilty. I never had depressive feelings or nightmares. “

Anwar Congo, one of the gangsters, still suffers from nightmares. At one point, Anwar decides to remake the scene of a torture, as he plays the victim. “Did the people I tortured feel what I feel here?” Anwar wonders. “I’m sure they feel what they felt, because their dignity was destroyed and fear conquered them. All this terror possessed me at one point. It surrounded me and possessed me. ” Oppenheimer replies, “I think the people you tortured felt worse, because you knew it was a movie, and they knew they were going to be killed.”

The Act of Killing ends with one of the most surreal scenes ever seen in cinema. The ghosts of the victims thank the executioners, and tell them that they have finally reached heaven. They promise not to haunt them anymore, but there’s no one to haunt anymore.  Forgetfulness has settled over our minds and hearts, and only the most humane of us are still able to feel guilt and dream nightmares. And maybe we, who still have these nightmares of the genocides of the 20th century, are able not to repeat these horrors, to prevent them somehow, and not to let our reason and empathy fall asleep, because the sleep of reason gives birth to monsters.